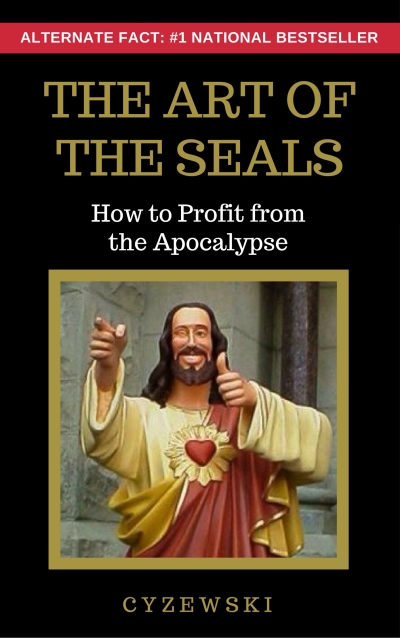 Are you tired of winning with President Trump? I bet you’re not. Now it’s time to start winning for all of eternity with my new book: The Art of the Seals: How to Profit from the Apocalypse, releasing April 1st. It’s going to be beautiful. You’re gonna love it.

I’m a smart guy. I know things about the Bible. I’m going to tell you about them so that you can become rich before the world ends. It’s coming. Believe me, I know. If it’s not, Trump’s going to make it happen.

Want to become rich before the millennium hits? You’ve gotta know where to invest, who to know, which seals to open, and which properties are far away from the beasts rising from the sea.

Everybody’s telling you the end times is going to be a mess. Blood moons. Death. Plagues. Wars. Frogs. They’re wrong. Those people aren’t smart. They don’t know how to make deals with the AntiChrist. They aren’t winners. They’re losers. Losers end up in the lake of fire.

This is the book that will get you a prime spot in the New Jerusalem. You’re going to love it. Just follow my simple plan for reading Revelation, and you’ll be a winner. You’re going to make the Apocalypse great again.

Why I Wrote This Incredible Book

America’s government is a mess. We can’t even figure out how to give rich people tax breaks any more. It’s terrible. We’ve got terrorists and bad people pouring over our borders. And worst of all, our president, who won by huge margins, hasn’t even started a war yet.

I’m telling you, the end of the world is coming. It’s going to be huge. Explosions, fire, and monsters. The smart people are going to cash in on their knowledge of the Bible while they can.

Don’t miss this opportunity. Be smart. Don’t settle for less, like having Schwarzenegger hosting the Apprentice. Bad host. Not a ratings machine.

The smart people are going to read the book of Revelation to cash in before things get really bad. This book is going to show them how to do it. Don’t miss out.

I’ve spent a lot of time writing things. I’ve been helping people think about the Gospels in amazing new ways. My book about Revelation got the highest review ratings on Amazon ever–did Obama do that? NO! Don’t believe me? I guess you like FAKE NEWS. Bad President. Can’t even get more than four stars.

Christianity is a disaster. Christianity will get all five stars in its Amazon reviews because of me. We’ll make it happen, believe me. I’m going to win.

You’re going to win too. My new book is going to show how Revelation can make you rich. It’s simple. Anybody can do it, but only winners do it because losers don’t do it. Losers lose. Winners are smart. They do things. Like me. I do things.

You should do things too. Like buying this book.

Is this a real book? Oh, it’s real, alright. You can take that alternative fact to the bank… in Russia. **Swallows gum**

Want to keep up with my real books?
Join my newsletter for discounts, updates, and a bit more:

7 thoughts on “My Next Book: The Art of the Seals: How to Profit from the Apocalypse”