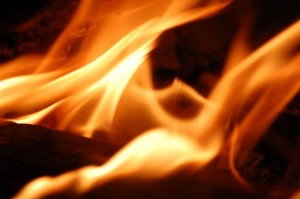 That’s what people keep telling me. When we share the Gospel, we’re inviting people into a relationship with God, into the Kingdom of God, and into the Spirit-guided fellowship of the Church. That’s it, supposedly.

The focus is on what we’re calling people to, right? We’re really not just offering fire insurance? Or are we…

Why is it that so many Christians spend time sharing the bad news before the good news? Are they using hell as a scare tactic?

Why do so many leading Christian pastors say what we believe about hell is extra super important?

I would argue that it’s because they’re actually selling fire insurance.

They would counter, “We’re just sharing the truth of the Bible. Hell is in the Bible, Jesus spoke about hell. We’re just being faithful.”

I’m not so sure about that. In fact, hell was rarely mentioned in the spread of the Gospel.

Did Jesus speak about hell in the same way we do today?

True, Jesus warned the teachers of the Law and Pharisees about being cast outside of God’s Kingdom—thrown into Gehenna. He warned the unprepared that they would be left out of God’s feast where they would weep and snap their teeth. That’s not the same thing as our concept of hell being a place of eternal conscious torment by the way.

However, the core message of Jesus was the Kingdom of God. His message was “Repent, for the Kingdom of God is near.” He went around healing, casting out demons, and teaching things like the Sermon on the Mount over and over again.

Judging by today’s standards, Jesus had a terrible track record of sharing the bad news before the good news.

Even the sermons in the book of Acts only mention God’s judgment once. There’s nothing about hell in all of the sermons of the early church when the church grew by leaps and bounds because of the Spirit’s empowering.

Far from providing details about the fiery fate of unbelievers for eternity, Jesus and his disciples spent the vast majority of their time pointing people to life and freedom and offered very little by way of details about the consequences.

What’s the point of it all? They actually weren’t offering eternal fire insurance. They were inviting people to follow Jesus, to enter his Kingdom, and to live in step with the Holy Spirit. Hell didn’t come up because it wasn’t a key part of the message.

Here’s the focus of the New Testament: The followers of Jesus are proclaiming the coming of the kingdom and making disciples.

We’re not called to proclaim the terror of hell.

I at least don’t see anyone in the New Testament doing that.

That doesn’t mean we overcompensate by saying that everybody is cool and can do whatever. God is just. There will be judgment. We will be called to account for what we have done and left undone. There is a weight to that message for us. We shouldn’t ignore it.

However, judgment isn’t the thing we’re called to proclaim. We’re inviting people to follow Jesus, to join in the Kingdom. An invitation is not the same thing as a warning.

Whatever you believe about hell, there’s no escaping that making hell central to the Gospel message draws us in the wrong direction.

The Gospel says that the Kingdom is here. Repent so that you can join it. Jesus calls us to follow him with an invitation. If we need hell in order to scare people into God’s Kingdom, then we’re emphasizing the wrong thing.

Jesus didn’t need to say much about hell in order to share the Gospel. Why do we?

This post is adapted from my book: A Christian Survival Guide: A Lifeline to faith and Growth.

Most links to books on Amazon are affiliate links. Assume that links have an affiliate component unless otherwise specified.
Loading Comments...
Comment
×