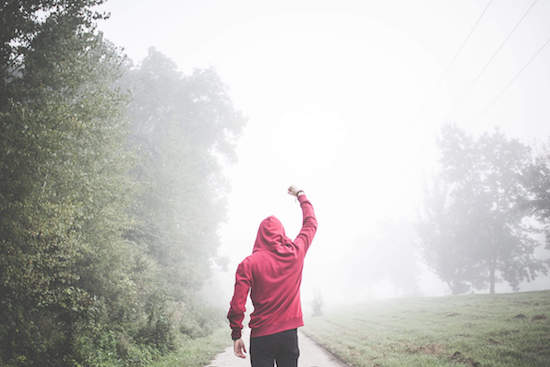 Imagine you’re standing in a line of soldiers preparing to charge the field in battle.

Your commanders ride back and forth on their massive horses, neighing and rearing up in preparation for the coming battle. They shout about honor and bravery, calling you to fight to your dying breath for the high ideals of your people.

Falling back at this moment is a betrayal to everything you believe.

All of history is pivoting on this battlefield, and your duty is to charge forward in fighting for these ideals that your enemy despises.

You’ve trained yourself for years for this moment. You’ve deprived yourself of things that many others take for granted. You’ve learned how to become a warrior and have surrounded yourself with many others committed to the same ideals and values.

As the enemy slowly advances, you charge the field with your fellow soldiers, willing to give your life for this cause that could turn the tide of history.

Then, you notice something out of the corner of your eye…

There’s only a small group of you who charged forward.

The enemy army on the other side of the field of battle is laughing at you, and their commanders are meeting with your generals. They’re shaking hands and forming an alliance.

As you return to the ranks of soldiers who didn’t charge the field, they’re still praising the commanders and shouting insults at the enemy who threatens them. They’re even more committed to the cause.

Your commander assures you that you’re going to do an even better job defending your values and goals by working with the enemy. They have real power and influence to help you.

“Wait, you shout, our commander just made an alliance with the people opposed to everything we believe in! That’s wrong!”

“Liar! Traitor! You’re not one of us!” they shout. “Don’t you lecture us about what’s right! Who made you our judge?”

And so you walk away, not sure what you just gave your life to, and you ask how much of it all was a lie and complete sham designed to glorify your commanders and generals who had rigged so much of it for their our benefit.

That is what it feels like to be an evangelical Christian these days.

I was raised in an evangelical subculture of sexual purity, manhood defined by bravery and honor, and benevolent patriarchy that said women had more limits than men, but men were duty-bound to protect and defend women.

Rather than pursuing sex at every turn like the godless masses, we were supposed to open doors for women, defend women the way a knight would defend a princess, and stand up for the truth as people of principle who knew right from wrong.

Then Trump and Kavanaugh came along, and the majority of the evangelical culture said, “Compromise is great if the guy can help us!”

It feels like everything I was raised to believe in and value was given a middle finger.

I left the illusion of “benevolent patriarchy” behind a long time ago (and it should be deconstructed in its own time and place), but the evangelical embrace of Trumpism and Kavanaugh is an ultimate act of betrayal against everything we were told our movement stood for. We haven’t even touched on the racism and xenophobia pulsating beneath the surface of the movement. I’m just talking about what the ideals and beliefs that we were told to believe in.

Even the window dressing that masked our many other sins is a sham.

If I had still been immersed in the evangelical subculture and its benevolent patriarchy, I still would have told you that there’s no chance evangelicals would ever support a Supreme Court nominee who had so many credible accusations of abuse and financial impropriety attached to him.

I was naïve. I had thought that our lionizing of courage, bravery, honor, and moral consistency meant something.

The people who criticized Nietzsche based on a Wikipedia skim of his philosophy became the ones to embrace a crass will to power that has destroyed everything they were supposed to believe in.

The people who spent their weekends watching Braveheart and not having premarital sex have fled from honor, morality, and courage in order to support men like Trump and Kavanaugh who have numerous credible accusations of sexual assault and financial mismanagement against them. The promise of power and the protection these men promise is too appealing.

Instead of demanding higher morals, defending the honor of women, and demanding honesty, too many evangelical men have joined the chorus Kavanaugh supporters and doubters of Dr. Ford. They have made themselves fictional victims, imagining an instance of being falsely accused of rape instead of actually addressing the real instances of rape.

They have defended their fragile honor by undermining the God-given dignity of women, thus ensuring the farce of their honor and courage.

The Southern Baptist Convention, whose leadership and leading pastors have been among the most vocal (though not only) supporters of Kavanaugh without reservation or condemnation, are among the most visible of this group of cowards. Even Russell Moore, who entertained that the accusations against Kavanaugh could prove disqualifying, never even once personally tweeted in support of Dr. Ford or the women who have been traumatized (or re-traumatized) by the Kavanaugh hearing.

I can only hope that they recognize right from wrong but are too cowardly to stand up for truth and morality because of what they could lose. I also know that plenty of evangelical leaders have privately expressed their horror at Kavanaugh without publicly standing against him.

When standing up for victims and for their values could cost these men their positions, influence, and power, they have retreated and made compromises that will surely do much to advance their own prestige in their circles of influence but completely undermine what they claim to believe.

Is this not the very embodiment of cowardice?

This is a dramatic fall for men who lionized the warriors of Scotland and who imagined themselves the defenders of women. Reality has shown us that these men are only honorable and courageous in their Braveheart-inspired fantasies.