Growing up as an evangelical, I learned a simple question that determined what I should believe and how I should put my faith into practice:

WHAT DID PAUL DO?

If Paul did it, believed it, or even suggested it as maybe a good idea, then it was good enough for me. To my shame, I remember telling one of my Bible professors in college that it was more important in my eyes to study the epistles than the Gospels.

He gently suggested that I should reconsider that… and I certainly have.

Prioritizing of Paul aside, it is the great fortune of American evangelicals today that Paul offers us unequivocally excellent advice for our current situation where evangelical Christianity appears to be fragmenting, if not altogether collapsing due to political and cultural compromise.

Far too many evangelicals have aligned the Kingdom of God with a single political party and a patriarchal, white supremacist culture that idolizes power and wealth.

Christians throughout America are dropping the “evangelical” label because it has either become meaningless or has taken on far too many negative associations.

Evangelicals are mocked and disparaged because of the ever-shifting values and moral “standards” of a few talking head leaders who continue to work the political system for their own gain and a sizeable evangelical group that fails to see serious issues such as overt racism and xenophobia as deal breakers in their leaders.

Thoughtful hashtags are emerging around questions of evangelical identity and an evangelical future: #stillevangelical #exevangelical. Back in the early 2000’s we used terms like “younger evangelicals” (via Robert Weber) and “post-evangelical” to describe this fragmenting. Should we drop the label “evangelical”? Abandon the movement? Fight for it?

Significant portions of the evangelical movement are corrupt, but there are many positive members and hopeful signs emerging. Regardless, I am not personally interested in preserving a movement or a label. It may be more helpful to understand where we are, what God is saying, and to sort out what to do next with a clear head.

I’d like to suggest that there is a very simple and productive next step every evangelical can take in response to the failures and chaos of our current evangelical situation, and it conveniently meshes with what Paul did. You can even call it a “biblical response” for bonus points. Here is the plan, ready?

Not forever, but for a while. You could say that many of us evangelicals need to take a retreat of sorts from whatever we’ve been doing. We need to surrender for a season instead of constantly forging ahead, trying to make an overhaul on the fly.

I suggest this because many evangelicals are discouraged, confused, and uncertain about the future. We could stay in the chaos of our movement and try to sort out a next step, or we could retreat, wait on the Lord, and then move forward when we gain a bit of clarity.

Throughout the Bible and the history of the church, there is a pattern of reform emerging from prophets and communities in the wilderness or in solitude. From Elijah to John the Baptist to the desert fathers and mothers, to the many nuns and monks who reformed the church from the solitude of their cloisters, reform and prophetic direction has come from those who retreated in order to seek God before spreading their ideas more widely.

There’s a principle for prayer taught by Henrí Nouwen that we first need to let go of what we’re holding before we can receive something from God. A time of surrender and retreat before God can help us let go of the negative influences on our lives.

I suspect that we’ll look to different leaders and teachers as well as shift some of our priorities on the other side of this retreat.

Here is what Paul reported about his own retreat following his Damascus road experience when his entire world came crashing down:

“You have heard, no doubt, of my earlier life in Judaism. I was violently persecuting the church of God and was trying to destroy it. I advanced in Judaism beyond many among my people of the same age, for I was far more zealous for the traditions of my ancestors. But when God, who had set me apart before I was born and called me through his grace, was pleased to reveal his Son to me, so that I might proclaim him among the Gentiles, I did not confer with any human being, nor did I go up to Jerusalem to those who were already apostles before me, but I went away at once into Arabia, and afterwards I returned to Damascus.” (Galatians 1:13-17 NRSV)

We don’t exactly know what Paul did in Arabia, but whatever God revealed to him brought him in unity with the rest of the church (Galatians 2:1-2).

At a time when evangelicals are distracted, divided, and uncertain about what to do about a movement that appears destined for the rocks, there aren’t simple answers or clear next steps. Perhaps we can relate to Paul, finding out that the cause we’ve given our lives to is, at least in part, misguided, corrupt, and even, at times, opposed to the very people Jesus dearly loves.

It’s safe to say that our own wisdom got us into this mess, so it surely won’t get us out of it. If anything, it’s going to just lead us into another mess.

I believe that God has not abandoned us, but if we have any hope of hearing God’s voice, we need to create space for God to speak. It’s not a mistake that John the Baptist proclaimed his message of repentance and restoration in the wilderness—preparing the way for the Lord. Jesus spent the majority of his ministry in relatively isolated spaces as well.

If you’re a discouraged or uncertain evangelical who is dispirited by our movement, then perhaps it’s time to step back. You may even hear the whisper of God to guide you forward, but first you need to venture up to the mountain to hear it.

You can read more about the evangelical retreat by downloading my new book for free on most eBook sites or just $.99 on Amazon. 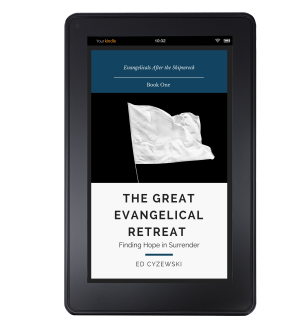